Enrico Cecchetti (1850 - 1928) was one of the most important influences on the foundations of modern classical ballet training and resulted in the creation of the Cecchetti Society and our Cecchetti Classical Ballet Faculty. He evolved a method of training that is as relevant today as it was then. The Cecchetti principles of training produce outstanding artistic and technically accomplished dancers, able to work with today’s directors across a spectrum of ballet and contemporary dance companies.
His name is pronounced Chi-Ketti

In 1924 the Cecchetti Society was incorporated with the Imperial Society of Teachers of Dancing (ISTD). The Faculty’s contribution has helped promote the work of the Society and protect the Cecchetti heritage, whilst also responding to the changing face of dance. In 2020 The ISTD undertook an organisational re-structure, creating a new appointed post – Head of Faculty Development for Cecchetti Classical Ballet.

Esteemed Society patrons are Dame Monica Mason DBE, Sir David Bintley KBE, Lesley Collier CBE and Kevin O’Hare CBE. In the many years that Cecchetti classical ballet has been affiliated to ISTD it has evolved and expanded, providing a wide range of training and performance opportunities for children, students and teachers. With recognised examinations and qualifications, Cecchetti classical ballet is now taught across Europe and beyond.
​
His dancing career took him to the Imperial Russian Ballet, where he created the role of The Bluebird in The Sleeping Beauty. Joining Diaghilev's "Ballets Russes" in 1909. He became one of the greatest teachers in ballet history. Among his pupils were Anna Pavlova (below) and Vaslav Nijinsky, Alicia Markova, Marie Rambert and Ninette de Valois who founded The Royal Ballet and its school.

Dame DARCEY BUSSELL D.B.E.
​"The Cecchetti work has given me strength, discipline and co-ordination. It wasn't until I got into the Royal Ballet Company that I realized how lucky I was to have had that training."


Sir FREDERICK ASHTON founder choreographer for the Royal Ballet
“If I had my way, I would always insist that all dancers should daily do the wonderful Cecchetti port de bras. It inculcates a wonderful feeling for line and correct positioning and the use of head movement and épaulement, which - if properly absorbed - will be of incalculable use throughout a dancer's career". 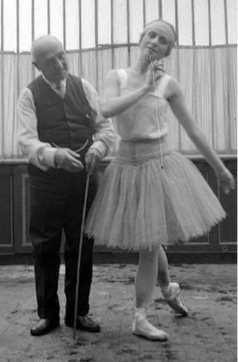